The general rule for compost is that the smaller the pieces of material that you toss in, the speedier the composting. I decided to toss some chunky pieces into one of my small YOLO Compost Tumbler shells just to see what would happen and how it compared to my other batches. Needing to empty the shell, I wondered whether I could use unfinished compost in my garden. Good news! I can.

As you would expect, even weeks later the mostly whole potatoes, large carrot pieces and other big chunks were still readily identified for what they are. Even ‘harder’ materials like butternut peels and gem squash shells broke down faster. Everything surrounding these large pieces had composted.

Now that my second shell is 3/4 full and ready to be left to mature so that the last-added materials can compost fully, I need to empty the first shell to begin a new batch. Can I use this unfinished compost now? 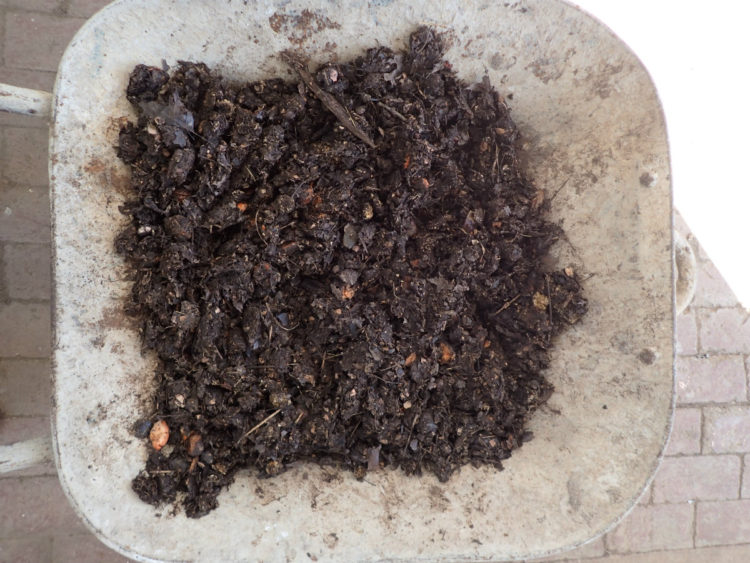 Yes! Unfinished compost can be used as is but as a mulch. This is a layer of material applied on top of soil rather than being dug in to the ground. Unfinished compost is ideal to use as mulch for all plant types – flowers, vegetables, shrubs and trees. When used as mulch, you have the additional benefit of increased water retention in the soil and mulch breaks down slowly adding nutrients to the soil over time. In summer, mulch protects the soil underneath it from the baking sun.

Generally, it is not recommended that unfinished compost be dug into the ground, especially if it is mostly slow-to-compost ‘brown’ carbon-rich materials like dry leaves. Organisms in the soil get to work on unfinished compost and they consume oxygen, depriving plant roots of it. During the composting process, organic chemicals are released and these can inhibit seed germination and seedling growth.

BUT, we’re not producing vast quantities of unfinished compost at any one time and after even 6-8 weeks in a YOLO Compost Tumbler, your kitchen-cutting-rich material will mostly be almost-there compost. If a tumbler-full of unfinished compost is spread thinly and dug in, it will have little impact on your plants.

In winter composting speed slows down regardless of the composting method. If you’re making lots of hearty vegetable soups, you may also end up with more kitchen cuttings and peelings which will fill your shell faster. You could indeed end up with a shell of mostly-decomposed, unfinished compost that you’d like to empty.

Go ahead. Use it. Dig in the most composted material, spread the rest on the ground surface as a mulch and let nature complete the process.